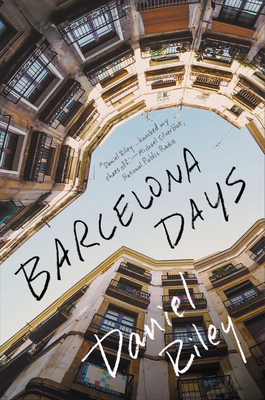 In this captivating novel, an erupting Icelandic volcano grounds all flights in and out of Europe, forcing four vacationing Americans to reckon with the problems they'd hoped to leave behind in Barcelona.
Whitney and Will are a perfect couple by all appearances, their relationship rock-solid, and their engagement soon to be announced. Before their impending nuptials, however, Whitney suggests a lighthearted experiment: why not give each other three romantic "free passes" before getting married? Three opportunities to imagine other lives before returning with new appreciation for each other. On what's meant to be the last night of a romantic Barcelona vacation, they agree to regale one another with details of these harmless trysts. They grin and bear it, and fall asleep feeling mostly satisfied, and relieved to be firmly together again.
But then a volcano erupts overnight, spewing a cloud of ash across Europe and grounding all flights indefinitely. Trapped in Barcelona, their paths intertwine with a star basketball player, his future dashed by a crippling injury, and a foreign exchange student with a double life, about to return home and face reality.
Whitney and Will flirt, provoke, dance, and drink. Over the next three days, they will use and be used by their new friends, once again testing the boundaries of their relationship -- but this time, can it survive?

Daniel Riley is the author of Fly Me and the Features Editor at GQ Magazine. He grew up in Manhattan Beach, California, and lives in New York City.

"From beginning to end, the reader walks with Whitney and Will along the precipice marking an edge they may or may not have crossed. With dry humor and involving dialogue, Riley steps boldly into territory other authors have only tentatively approached."—Enobong Tommelleo

"Come for the couple drama, stay for the descriptions that will make you feel like you're in Spain."—Emily Laurence, Well + Good

PRAISE FOR FLY ME

"Riley conjures a Technicolor vision of seventies California and casts Suzy's ambition as a feminist quest for self-determination. Her exploits build to a climax that suggests the book's title is not so much an invitation as a challenge."
---The New Yorker

"Riley has a stylish grasp of setting as the axis of place and time, writing about the era with captivating authority, palpable texture, and a sure-footed knack for rebuilding a moment out of its pop detritus."
---The New York Times Book Review

"Daniel Riley... knocked my shoes off. I wasn't expecting any of it."
---Michael Silverblatt, National Public Radio

"A vibrant, pitch-perfect rendering of decadent beachside youth culture, with its surfing, drugs, rock 'n' roll, and all-day parties... It's a well-plotted, tension-filled novel... Riley keenly portrays the confusion and frustration of youth."
---The Los Angeles Review of Books