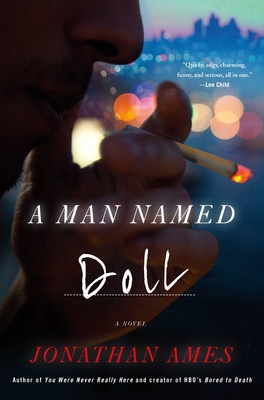 In this deliciously noir novel from the creator of HBO's Bored to Death, idiosyncratic private detective Happy Doll embarks on a quest to help a dying friend in a sun-blinded Los Angeles  as "quirky, edgy, charming, funny and serious" as its protagonist (Lee Child).

Happy Doll is a charming, if occasionally inexpert, private detective living just one sheer cliff drop beneath the Hollywood sign with his beloved half-Chihuahua half-Terrier, George. A veteran of both the Navy and LAPD, Doll supplements his meager income as a P.I. by working through the night at a local Thai spa that offers its clients a number of special services. Armed with his sixteen-inch steel telescopic baton, biting dry humor, and just a bit of a hero complex, the ex-cop sets out to protect the women who work there from clients who have trouble understanding the word "no."

Doll gets by just fine following his two basic rules: bark loudly and act first. But when things get out-of-hand with one particularly violent patron, even he finds himself wildly out of his depth, and then things take an even more dangerous twist when an old friend from his days as a cop shows up at his door with a bullet in his gut.

A Man Named Doll is more than just a fascinating introduction to one truly singular character, it is a highly addictive and completely unpredictable joyride through the sensuous and violent streets of LA.

Jonathan Ames is the author of I Pass Like Night; The Extra Man; What's Not to Love?; My Less Than Secret Life; Wake Up, Sir!; I Love You More Than You Know; The Alcoholic; The Double Life Is Twice as Good, and most recently, You Were Never Really Here (adapted into the acclaimed film starring Joaquin Phoenix). He's the creator of two television series, Blunt Talk and Bored to Death, and has had two amateur boxing matches, fighting as "The Herring Wonder."

"I loved this book - it's quirky, edgy, charming, funny and serious, all in one. Very highly recommended."
—Lee Child, #1 bestselling author of BLUE MOON

"While the macabre seriousness of the crimes and the narrator’s good-nature and sardonic humor might seem to be at odds, Ames makes it work through assured plotting, superb local color, and excellent prose. Readers will happily root for Doll, a good detective and a decent human, in this often funny and grisly outing."—Publishers Weekly

Readers expecting action won’t be let down, and the sparkling yet unpretentious language gives the whole an extra kick. Recommend to noir fans, action fans, anyone who likes a good read.—Don Crinklaw, Booklist

"Ames knows exactly what he's doing, and keeps the action kinetic but realistic, while imbuing the narration with sufficient hard-boiled style to anchor things firmly within the tradition."—Declan Hughes, The Irish Times

“A MAN NAMED DOLL is so fun and propulsive I didn’t just read it in one sitting, I read it in what felt like a single breath. Happy Doll is a tremendously likable main character, and the Los Angeles he inhabits is vibrantly alive in every detail. I hope Jonathan Ames has many more adventures planned for the newest P.I. in town.”
—Lou Berney, author of the New York Times-bestselling NOVEMBER ROAD

“If Elliott Gould’s Philip Marlowe landed in the middle of Uncut Gems, you’d have something like Jonathan Ames’s A MAN NAMED DOLL, which expertly mines the dark humor, mordant wit and dreamy fatalism of great LA noir. And at its center is a detective with a battered heart and bruised conscience. I’d follow him, and his dog George, anywhere.”
—Megan Abbott, Edgar Award-winning author of DARE ME

"Ames's keen-eyed observations of the city make this a contemporary noir, it's frequently macabre goings-on shot through with darkly comic flourishes. Motel, money, murder, madness: it has all you need to keep you happy."—The Times

“A Man Named Doll is a smart, sharp, and stylish noir for the modern day. In his cinematic tour of Los Angeles that is both gritty and gorgeous, Ames has delivered a novel that is both current and timeless and has introduced a sleuth who fits all the old traditions while creating his own. Crime at its finest!”
—Ivy Pochoda, author of THESE WOMEN and WONDER VALLEY

“A MAN NAMED DOLL: a singular read about the peril of having a body. Gallows humor in overdrive on Dilaudid, crashing merrily downhill.”
—Bill Beverly, author of Gold Dagger Award-winning DODGERS

"A MAN NAMED DOLL infuses the private eye concept with an unpredictable, vibrant energy, while losing none of the genre’s core, noir elements. Ames is a master of blending humor, pathos, and grit - and A MAN NAMED DOLL is no exception. A truly modern L.A. noir that still manages to feel timeless and steeped in the classics that came before.”
—Alex Segura, Anthony Award-winning author of BLACKOUT