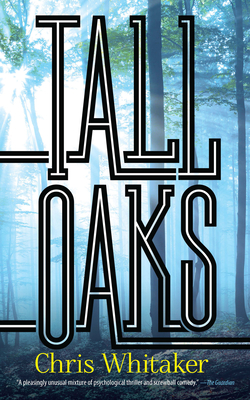 It's rare that a novel can be both brilliantly comic and tragic, and balance the two so effortlessly. -- Sun

Nothing is as it seems in Tall Oaks, a small California town where everyone knows each other and violent crime is unheard of. The community's idyllic fa ade is shattered when a kidnapper in a clown costume snatches three-year-old Harry Monroe from his own home. Despite sensational media coverage and dogged police investigations, the abduction remains a mystery. Three months later, Harry is still missing and most people have moved on, except for Jessica, Harry's distraught mother, and Jim, the local sheriff. Anyone in Tall Oaks could be a suspect: Jerry, the loner with a secret that only his mother knows; Jared, the roving lothario; teenage Manny, an aspiring gangster; and even Jessica's Aunt Henrietta and Uncle Roger, who are clearly hiding something.
Chris Whitaker's debut novel, with its striking blend of tragedy and offbeat humor, was awarded the U.K. Crime Writers' Association New Blood Dagger Award. The Guardian praised this beguiling novel as a pleasingly unusual mixture of a psychological thriller and screwball comedy, noting that the combination of verve, humor, and pathos make it well worth a read. A gripping debut. -- Mail on Sunday A brilliant, beautiful, sad, funny book ... It made me laugh, but also made me cry more than any other book I've read this year. -- Emma Flint, author of Little Deaths Completely blew me away. -- Lisa Hall, author of Between You and Me and The Party Chris Whitaker builds an entire town in the reader's head and masterfully inhabits it comic, poignant, gripping life. Tall Oaks becomes a part of you. -- David Whitehouse, author of Mobile Library and Bed

London-based author Chris Whitaker won the U.K. Crime Writers' Association's New Blood Dagger Award for his debut novel, Tall Oaks, which was also shortlisted for the CrimeFest Last Laugh Award and described by The Guardian as "an absolute delight." His second novel, All the Wicked Girls, was published in 2017.