My Life in the Sunshine: Searching for My Father and Discovering My Family (Hardcover) 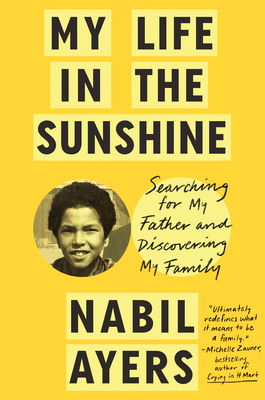 “Nabil traces the image of his father through song. With growing fascination and heartbreak, he draws out meaning from the shadow of absence, and ultimately redefines what it means to be a family.” - Michelle Zauner, New York Times bestselling author of Crying in H Mart and Grammy nominated musician Japanese Breakfast


A memoir about one man's journey to connect with his musician father, ultimately re-drawing the lines that define family and race.


Throughout his adult life, whether he was opening a Seattle record store in the '90s or touring the world as the only non-white band member in alternative rock bands, Nabil Ayers felt the shadow and legacy of his father's musical genius, and his race, everywhere.

In 1971, a white, Jewish, former ballerina, chose to have a child with the famous Black jazz musician Roy Ayers, fully expecting and agreeing that he would not be involved in the child's life. In this highly original memoir, their son, Nabil Ayers, recounts a life spent living with the aftermath of that decision, and his journey to build an identity of his own despite and in spite of his father’s absence.

Growing up, Nabil only meets his father a handful of times. But Roy’s influence is strong, showing itself in Nabil’s instinctual love of music, and later, in the music industry—Nabil’s chosen career path. By turns hopeful--wanting to connect with the man who passed down his genetic predisposition for musical talent—and frustrated with Roy’s continued emotional distance, Nabil struggles with how much DNA can define a family… and a person.

Unable to fully connect with Roy, Nabil ultimately discovers the existence of several half-siblings as well as a paternal ancestor who was enslaved. Following these connections, Nabil meets and befriends the descendant of the plantation owner, which, strangely, paves the way for him to make meaningful connections with extended family he never knew existed.

Undeterred by his father's absence, Nabil, through sheer will and a drive to understand his roots, re-draws the lines that define family and race.

Nabil Ayers has written about music and race for publications including The New York Times, NPR, Rolling Stone, GQ, and The Root. Ayers is the President of Beggars Group US, where he has released albums by many GRAMMY Award-winning artists. He currently resides with his wife in Brooklyn, New York.

"Across a soundscape of '70s New York jazz, '90s Pacific Northwest grunge, and '00s indie rock, Nabil traces the image of his father through song. With growing fascination and heartbreak, he draws out meaning from the shadow of absence, and ultimately redefines what it means to be a family." -Michelle Zauner, New York Times bestselling author of Crying in H Mart and Grammy nominated musician Japanese Breakfast


"Ayers writes with a quiet urgency that drove me toward the end of this book with bated breath. Race, class, inheritance, music, family, and love are all up for questioning, pulled apart, and formed with new definitions along the way. The author's curiosity about where he comes from, who he comes from, and what comes next are on full display as artistic renderings of the human condition through a singular lens. It's a unique life story I am loath to spoil, but happy to recommend you read. My Life in the Sunshine is more than worth your time. It's worth your full attention." -Ashley C. Ford, New York Times bestselling author of Somebody's Daughter


“You’d think it would be enough that Nabil has this first hand and vital perspective on family, music, and race to offer, but he also had to go ahead and be an amazing writer to boot—thoughtful, generous, wise, and essential." –John Hodgman, New York Times bestselling author, comedian, and actor

"Riveting and relatable, heartbreaking and at times hysterical— Ayers' rhythmic prose is lyrical, propulsive, spellbinding. I couldn’t put My Life in the Sunshine down till the end. I already know this is a book I'll be returning to, again and again." —Allison Russell, Grammy nominated Musician and Songwriter for Outside Child


"My life in the sunshine is too fun to be as poignant as it is. The book reads like music. As another mixed-race Jewish kid who has shaped his life around music, I had a lot of ways into this memoir. This story is for anybody who has ever tried to find the missing puzzle pieces in their own life." - Daveed Diggs, Grammy and Tony award-winning actor, musician, writer, and producer


"A thought-provoking, fascinating, delicious read. No matter how tough and emotional Nabil’s journey is, he has a way of telling his story so beautifully—it will pull at your emotions very deeply. My soul feels fed." -Angel Bat Dawid, composer and musician


“Among his many other talents, Nabil is a really thoughtful, evocative writer whose well-formed sentences conjure a whole lot not just within their lines but between them. He knows how to tell a story and this book is a great one.” –Michael Azerrad, award-winning music journalist, author, and musician


“In a moving and candid memoir, Ayers memorably probes the meaning of family while offering unique insight into the racialized world of the American music industry. A searchingly eloquent memoir of music and family.” –Kirkus


"Within these passages, and in tandem with his story of self, Ayers gives the reader a reflection of the times, frequently acting as a historian and ethnomusicologist. While captivating in their detail, these moments explode expectations of memoir as a genre and eloquently weave a personal story through space and time." –Cleveland Review of Books