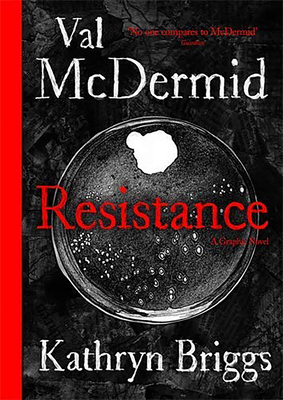 The first graphic novel from Britain's "Queen of Crime" (Scotsman) and gorgeously illustrated by up-and-comer Kathryn Briggs, Resistance is a chilling but incredibly moving and inspiring story of individuals pressed to rise above their station, first to nail down the truth of a looming pandemic, and later to try to fight it.

Journalist Zoe Beck has taken a break from hard-hitting investigative reporting to spend more time with her family, which is how she finds herself doing celebrity Q&As at an outdoor music festival near the Scottish border. She and her friends, who run a food truck, head north, along with 150,000 festival-goers for a weekend of music and camping.

Then, some of the food truck's customers begin to fall ill, and many point to food poisoning. But when the festival ends and the attendees scatter across England, more people begin to get sick and die. What's worse, it is spreading fast and baffles doctors, resisting all efforts to contain or cure it. With time running out, Zoe is compelled to fight for the truth, even as she loses that which she holds most dear.

VAL MCDERMID's best-selling novels have won the Los Angeles Times Book of the Year Award, and the Crime Writers' Association's Gold Dagger and Cartier Diamond Dagger Award for outstanding achievement. She is also a multiple finalist for the Edgar Award, including for the Fact Crime nominee Forensics. KATHRYN BRIGGS is an internationally recognized, award-winning graphic novelist and arts educator. Her collection of short comics "Magpie" was awarded Runner Up for Graphic Novel of the Year. She is currently a teaching artist for Fleisher Art Memorial in Philadelphia.