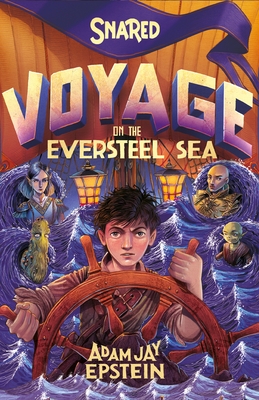 Wily Snare sets sail on the high seas in the third and final installment of the middle grade fantasy adventure series from Adam Jay Epstein, Snared: Voyage on the Eversteel Sea

Wily’s enemies are after his throne.

The man who kept him captive for much of his childhood, the evil mage Stalag, is still at large, and Wily knows the kingdom will never be safe as long as he’s a threat. Meanwhile, Wily’s father, the Infernal King, has escaped prison and he’s looking to retake power.

When Wily learns the villains are traveling to the fabled Eversteel Forge to build a mechanical army, it’s up to him and his companions to journey across the sea and stop their enemies.

On the way, they face piracy, betrayal, sea monster attacks, and the dangers of a mysterious desert island. But the greatest challenge is to Wily’s loyalties—and if he can forgive a father he no longer trusts.

Praise for Snared: Lair of the Beast:

Praise for Snared: Escape to the Above:

Adam Jay Epstein spent his childhood in Great Neck, New York, when he wasn't aboard his father's sailboat. He spent many days sitting in the neighborhood park, traveling to fantasy lands in his head (occasionally when he was supposed to be doing his homework). In college, he circled the world on a ship and studied film at Wesleyan University. He is the co-author of the internationally bestselling middle grade fantasy series The Familiars, the middle-grade sci-fi series Starbounders, and the middle grade fantasy series Snared. He has written film and television projects for Disney, Sony, Fox, MGM, Paramount, MTV, HULU, SYFY, and Disney Channel. He currently lives in Los Angeles with his wife, two daughters, and dog, Pixel.

Praise for Snared: Escape to the Above:

“Funny, compassionate, and entertaining... Readers will be immersed into this dark yet humorous world filled with unique characters.” —School Library Journal

“A fast-paced, refreshingly creative adventure that will thrill readers from the very first page.” —Shannon Messenger, New York Times bestselling author of the Keeper of the Lost Cities series and the Sky Fall series

“Fabulous characters and a unique mythology combine to create something really wonderful. Snared will ensnare you.” —Michael Scott, New York Times bestselling author of The Secrets of the Immortal Nicholas Flamel series.

“An imaginative blast of dungeon-crawling adventure with hilarious monsters and dastardly traps. Zany, heartfelt fun for everyone.” —Lou Anders, author of the Thrones and Bones series

“Snared is chock-full of quirky characters, fantastic world building, and wild, hilarious adventure with every turn of the page. I loved it and kids will love it too!”—Liesl Shurtliff, New York Times bestselling author of Rump

“Pure dungeon-crawling fun. Witty and page-turning, I never knew what cheerful mayhem was waiting just around the bend. I can’t recommend it enough.” —Zack Loran Clark, coauthor of The Adventurers Guild

“A thrilling fantasy adventure full of humor and heart. Adam Jay Epstein has created a fun, magical world readers will want to stay lost in.” —Jeff Garvin, author of Symptoms of Being Human

“Intruders in the dungeon! A lighthearted fantasy with a strong start.” —Kirkus