Save Me from Dangerous Men: A Novel (Nikki Griffin #1) (Paperback) 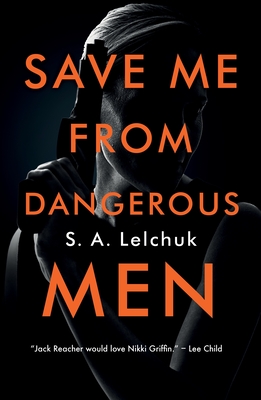 Nikki Griffin isn't your typical private investigator. In her office above her bookstore’s shelves and stacks, where she luxuriates in books and the comfort they provide, she also tracks certain men. Dangerous men. Men who have hurt the women they claim to love. And Nikki likes to teach those men a lesson, to teach them what it feels like to be hurt and helpless, so she can be sure that their victims are safe from them forever.

When a regular PI job tailing Karen, a tech company's disgruntled employee who might be selling secrets, turns ugly and Karen's life is threatened, Nikki has to break cover and intervene. Karen tells Nikki that there are people after her. Dangerous men. She says she'll tell Nikki what's really going on. But then something goes wrong, and suddenly Nikki is no longer just solving a case—she's trying hard to stay alive.

Part Lisbeth Salander, part Jack Reacher, part Jessica Jones, Nikki Griffin is a kickass character who readers will root for as she seeks to right the world's wrongs. S.A. Lelchuk’s Save Me From Dangerous Men marks the beginning of a gripping new series and the launch of a fabulous new character.

S.A. Lelchuk, author of the debut novel Save Me from Dangerous Men, holds a master's degree from Dartmouth College, and lives in Berkeley, California.

“Lelchuk pens a suspenseful page-turner...Original and inspired. The who-done-it and why are meticulously built, with breadcrumbs carefully laid out to give the reader an a-ha moment not a moment too soon….Lelchuk has set the stage for both a heroine and a world to which we will gladly return.”
—USA Today

"Nikki is a dangerous woman, sort of a Lisbeth Salander, but with a lot more heart. …Takes readers on a rock-'em-sock-'em motorcycle ride to a surprising conclusion. Along with the action, this outstanding series debut boasts a well-developed supporting cast whose interactions with Nikki make her bookstore as inviting as Louise Penny's Three Pines bistro.”
—Booklist, starred review

“Nikki's fight scenes are satisfying, clever, and exciting...Bookworms will love the references to classic novels, and Lelchuk winks at Nikki's similarities to a certain well-known literary vigilante. A timely and totally badass debut."
—Kirkus, starred review

“Terrific debut… This intelligent, action-packed thriller will resonate with readers as it touches on such themes as domestic violence, the widening gap between rich and poor, and the intrusive potential of advanced technologies like artificial intelligence...But the book’s real appeal stems from its powerful, distinctive protagonist."
—Publishers Weekly, starred review

"Save Me From Dangerous Men is a helluva ride: a fast-paced neo-noir with a stellar new heroine at its core. Comparing Nikki to Lisbeth Salander is inevitable—a supporting character even calls her Lisbeth—but she also owes half of her DNA to old-school, hardboiled private eyes like Sam Spade and Philip Marlowe...With its balance of terse dialogue, real stakes, literary love, and thrilling badassery, Save Me From Dangerous Men is a must-read for fans of neo-noir and powerful women. Nikki Griffin is far too compelling and exciting to be a one-off character, and we can never have enough vigilante ladies—with any luck, Lelchuk will oblige us with a full series."
—Angie Barry, Criminal Element

“Save Me from Dangerous Men is one of those rare thrillers that draws you in so relentlessly that you find yourself getting kicked out of bed and reading all night on the sofa. If you’re a fan of Jack Reacher or Lisbeth Salander, you are gonna love Nikki Griffin. This is an outstanding debut novel to what promises to be an exceptional series. Highly, highly recommended.”
—Douglas Preston, #1 New York Times bestselling co-author of the acclaimed Pendergast series

“An ass-kicking book lover who likes to teach bad men a lesson. Mean, lean prose that evokes the noir greats but with a thoroughly modern, feminist twist. A propulsive plot that will keep you turning the pages. Seriously — what’s not to like? Save Me From Dangerous Men is smart, darkly funny, and totally addictive. Don’t miss this thrilling debut!”
—Lisa Unger, New York Times bestselling author of Under My Skin

“Save Me From Dangerous Men pulses with daring and risk. Nikki Griffin, bookseller by day and private investigator by night, takes on men who hurt women and makes them sorry. Calm, complex, lethal, and fascinating, she’s the revenge fantasy you want right now.”
—Taylor Stevens, New York Times bestselling author of Liars’ Paradox and The Informationist