The Woman with Two Shadows: A Novel of WWII (Paperback) 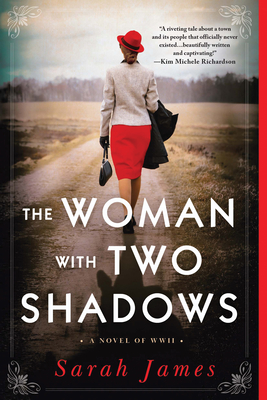 "A riveting tale about a town and its people that officially never existed and the secrecy behind one of the Manhattan Project's top-secret cities!" —Kim Michele Richardson, New York Times bestselling author of The Book Woman's Daughter

For fans of Atomic City Girls and Marie Benedict, a fascinating historical debut of one of the most closely held secrets of World War II and a woman caught up in it when she follows her missing sister to the mysterious city of Oak Ridge, Tennessee.

Lillian Kaufman hasn't heard from her twin sister since Eleanor left for a mysterious job at an Army base somewhere in Tennessee. When she learns, on an unexpected phone call, that Eleanor is missing, Lillian takes a train from New York down to Oak Ridge to clear up the matter.

It turns out that the only way into Oak Ridge is to assume Eleanor's identity, which Lillian plans to do swiftly and perfectly. But Eleanor has vanished without a trace—and she's not the only one. And how do you find someone in a town so dangerous it doesn't officially exist, when technically you don't exist either?

Lillian is thrust into the epicenter of the gravest scientific undertaking of all time, with no idea who she can trust. And the more she pretends to be Eleanor, the more she loses her grip on herself.

Sarah James is a graduate of the MFA Writing for Screen & Television program at USC and the BA Playwriting program at Fordham Lincoln Center. She currently works as a freelance writer.

"A Gone Girl-style thriller about a World War II-era woman desperately trying to figure out what happened to her twin sister after she disappears from a military base in Tennessee...an entertaining read." — Pittsburgh Post-Gazette

"For a debut author, The Woman with Two Shadows provides a little bit of everything: romance, suspense, and history, along with human emotions, failings, and soul searching. Author Sarah James is someone to be watched." — New York Journal of Books

"Debut historical novelist James centers this mysterious tale on the true story of the Oak Ridge military site... Her expertly crafted plot, which alternates between Lillian and Eleanor's backstory and their present, will leave readers wanting more of her expertly researched historical saga." — Booklist

"Utterly fascinating and meticulously researched, The Woman with Two Shadows is a riveting tale about a town and its people that officially never existed and the secrecy behind one of the Manhattan Project's top-secret cities responsible for creating the atom bomb used on Hiroshima and Nagasaki. James's debut is beautifully written and captivating!" — Kim Michele Richardson, New York Times bestselling author of The Book Woman of Troublesome Creek and The Book Woman's Daughter

"The Woman with Two Shadows is a twisting, atmospheric page-turner. Sarah James's debut, which is set against a part of America's World War II history long shrouded in secret, feels fresh and new, filled with complex characters and plenty of intrigue. You won't be able to put this one down!" — Julia Kelly, international bestselling author of The Last Dance of the Debutante