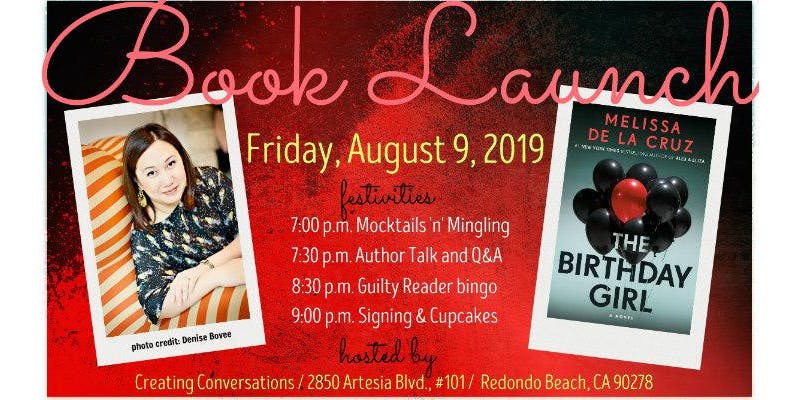 Beloved by young readers worldwide for her fifty novels of magic, fantasy, and contemporary realism, de la Cruz makes a triumphant return to adult fiction with THE BIRTHDAY GIRL. The domestic thriller centers on a glamorous woman’s 40th birthday party in Palm Springs, and what it means when the birthday girl is forced to confront the dark secrets of her youth.

You can register to participate in this event HERE!

The Birthday Girl: A Novel (Hardcover)

“De la Cruz expertly mixes biting satire with suspense and throws in more than a few surprises. Readers will be riveted as long simmering secrets come to light.” — Publishers Weekly

“[Melissa de la Cruz] contrasts the glamorous but vacuous world of the back-stabbing elite with gritty but often sweet memories of Ellie's impoverished youth… Scandalous and bittersweet, our heroine's charmed life seems to teeter on designer stilettos as she gets closer to the truth of who she really is.”— Kirkus

Ellie de Florent-Stinson lives a fabulous life. She has everything she ever wanted: a handsome husband; an accomplished, college-age stepdaughter; a beautiful ten-yearold girl; two adorable and rambunctious six-year-old twin boys; gorgeous homes in Los Angeles, Park City, and Palm Springs; a thriving career as a well-known fashion designer of casual women’s wear; and a glamorous circle of friends. She’s determined that her fortieth birthday party at her new mid-century-modern pad be absolutely perfect, down to the last detail. Except that her carefully laid plans seem to keep going awry—the hydrangeas are wilting in the desert heat, her husband’s yelling at the waiters, and her best friend can’t make the party at the last minute. But this isn’t the first birthday celebration that hasn’t gone as expected. And as her party’s about to start, she receives a text that causes long-buried memories of a toxic sweet sixteenth birthday, to come flooding back.

Unspooling in two timelines, the novel reveals the shocking details of Ellie’s past as it collides with her present. Unforgettable and powerfully told, THE BIRTHDAY GIRL is a “gasp out loud,” unputdownable must-read for Summer 2019 one that is certain to enthrall both fans for de la Cruz’s much adored Witches of East End series and readers discovering her storytelling prowess for the first time.