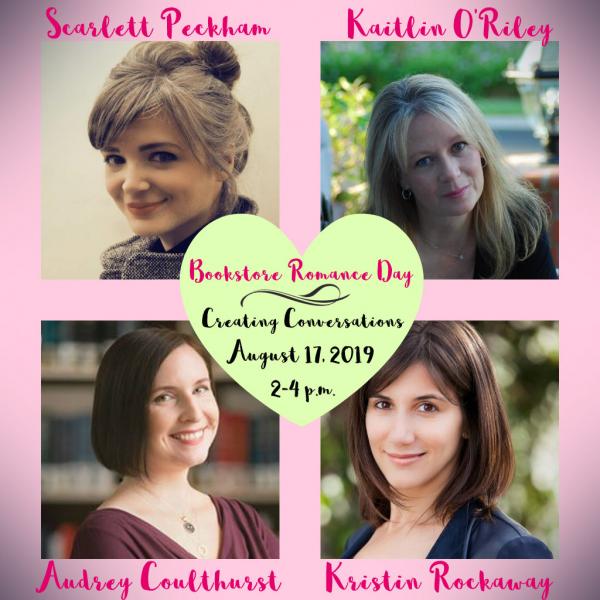 ❤️Scarlett Peckham ~The Earl I Ruined (Secrets of Charlotte Street, #2)

❤️Audrey Coulthurst ~Of Ice and Shadows (Of Fire and Stars, #2)

❤️Kristin Rockaway ~How to Hack a Heartbreak

The panel will be moderated by Liz Donatelli, event coordinator/bookseller at Creating Conversations and All About Romance book reviewer.

Light refreshments will be served.

You can register to participate in the event HERE!

The Earl I Ruined (Paperback)

When Lady Constance Stonewell accidentally ruins the Earl of Apthorp's entire future with her gossip column, she does what any honorable young lady must: offer her hand in marriage. Or, at the very least, stage a whirlwind fake engagement to repair his reputation. Never mind that it means spending a month with the dullest man in England. Or the fact that he disapproves of everything she holds dear.

He's supposedly the most boring politician in the House of Lords...

Julian Haywood, the Earl of Apthorp, is on the cusp of finally proving himself to be the man he's always wanted to be when his future is destroyed in a single afternoon. When the woman he's secretly in love confesses she's at fault, it isn't just his life that is shattered: it's his heart.

They have a month to clear his name and convince society they are madly in love...

But when Constance discovers her faux-intended is decidedly more than meets the eye--not to mention adept at shocking forms of wickedness--she finds herself falling for him.

There's only one problem: he can't forgive her for breaking his heart.

The Hamilton sisters have found true love to rival any novels sold in their famous London bookshops. And the story continues, as each of their offspring discovers the perfect partner . . .

Quiet and intuitive, Lady Mara Reeves has always felt more at home amid the green hills of her native Ireland than in London's stifling ballrooms. Determined to remain single, she's adept at gently rebuffing any suitor who comes her way. So why is she so drawn to Foster Sheridan, Earl of Sterling? It's a connection unlike anything she's ever known, yet complicated by one scandalous fact: the man she believes to be her destiny is already married . . .

Trapped in a loveless union with a woman who refuses to divorce him, Foster is resigned to loneliness until he meets the exquisite Mara. Her wants her as a wife, not a mistress, but he can't resist her unconventional offer. Their passion is intense, as is the risk. For even as Foster follows Mara home to Ireland, their pasts will lead them toward danger that only the deepest love can overcome . . .

Praise for The Heiress He's Been Waiting For

"This charming romance is a strong start, and readers will eagerly anticipate the next installment!" --Publishers Weekly (starred review)

"The same mix of engaging characters and an emotionally compelling love story found in O'Riley's Hamilton Sisters books provides a solid foundation for the launch of her series."
--Booklist

Of Fire and Stars (Paperback)

An atmospheric and romantic debut fantasy perfect for fans of Ash and The Winner's Curse.

Betrothed since childhood to the prince of Mynaria, Princess Dennaleia has always known what her future holds. Her marriage will seal the alliance between Mynaria and her homeland, protecting her people from other hostile kingdoms.

But Denna has a secret. She possesses an Affinity for fire--a dangerous gift for the future queen of a land where magic is forbidden.

Now Denna has to learn the ways of her new kingdom while trying to hide her growing magic. To make matters worse, she must learn to ride Mynaria's formidable warhorses before her coronation--and her teacher is the person who intimidates her most, the prickly and unconventional Princess Amaranthine, sister of her betrothed.

When a shocking assassination leaves the kingdom reeling, Mare and Denna reluctantly join forces to search for the culprit. As the two work together, they discover there is more to one another than they thought--and soon their friendship is threatening to blossom into something more.

But with dangerous conflict brewing that makes the alliance more important than ever, acting on their feelings could be deadly. Forced to choose between their duty and their hearts, Mare and Denna must find a way to save their kingdoms--and each other.

Plus don't miss the sequel: Of Ice and Shadows!

How to Hack a Heartbreak (Paperback)

Swipe right for love. Swipe left for disaster.
By day, Mel Strickland is an underemployed helpdesk tech at a startup incubator, Hatch, where she helps entitled brogrammers--"Hatchlings"--who can't even fix their own laptops, but are apparently the next wave of startup geniuses. And by night, she goes on bad dates with misbehaving dudes she's matched with on the ubiquitous dating app, Fluttr.
But after one dick pic too many, Mel has had it. Using her brilliant coding skills, she designs an app of her own, one that allows users to log harrassers and abusers in online dating space. It's called JerkAlert, and it goes viral overnight.
Mel is suddenly in way over her head. Worse still, her almost-boyfriend, the dreamy Alex Hernandez--the only non-douchey guy at Hatch--has no idea she's the brains behind the app. Soon, Mel is faced with a terrible choice: one that could destroy her career, love life, and friendships, or change her life forever.

Kristin Rockaway is a native New Yorker and recovering corporate software engineer. After working in the IT industry for far too many years, she finally traded the city for the surf and chased her dreams out to Southern California, where she spends her days happily writing stories instead of code. When she's not working, she enjoys spending time with her husband and son, and planning her next big vacation.