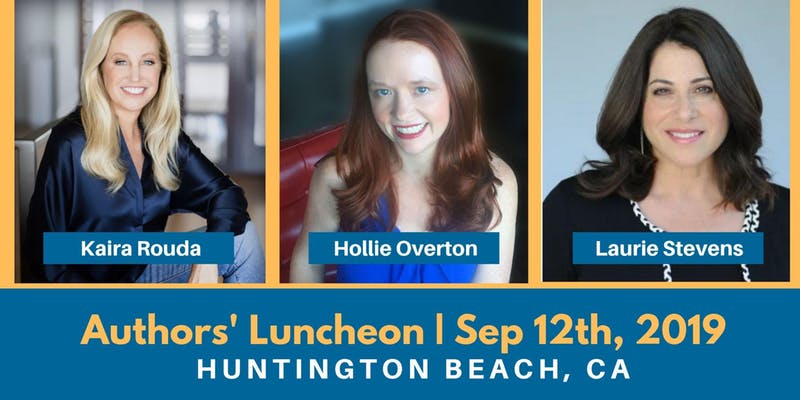 Join a trio of local mystery authors for this luncheon, lecture, and book signing at the Huntington Beach Central Library.

As summer fades and fall beckons, the Friends of the Huntington Beach Library's September luncheon event offers a menu of chilling plots from a trio of best-selling mystery authors.

Orange County local Kaira Rouda, whose most recent release The Favorite Daughter (June 2019) is a psychological thriller set in an Orange County gated community. In addition to her considerable writing success, Rouda is an award-winning entrepreneur and wife of U.S. Representative, Harley Rouda.

Joining her is Hollie Overton, who started her novel-writing in 2012 while simultaneously writing and producing TV dramas for CBS. Her novel, Baby Doll (2016), was a New York Times and international best-seller. In The Runaway (2018), the search for a teenage runaway sends her foster mother, a psychologist working for the LAPD, on a dangerous trip through the LA underworld.

Rounding out our distinguished line-up is Laurie Stevens whose novels feature LA Sheriff’s detective Gabriel McRay who faces his own inner demons as he attempts to hunt down a serial killer in one, The Dark Before Dawn (2011), and a sadistic killer in another, Deep Into Dusk (2013).

Lots of exciting plots with local settings from our three authors promises to make this September 12 event one you won’t want to miss. Tickets available here.

From the author of Best Day Ever, another gripping novel of psychological suspense set in an upscale Southern California community, for fans of B.A. Paris and Shari Lapena.

Jane Harris lives in a sparkling home in an oceanfront gated community in Orange County. It's a place that seems too beautiful to be touched by sadness. But exactly one year ago, Jane's oldest daughter, Mary, died in a tragic accident and Jane has been grief-stricken ever since. Lost in a haze of anti-depressants, she's barely even left the house. Now that's all about to change.

It's time for Jane to reclaim her life and her family. Jane's husband, David, has planned a memorial service for Mary and three days later, their youngest daughter, Betsy, graduates high school. Yet as Jane reemerges into the world, it's clear her family has changed without her. Her husband has been working long days--and nights--at the office. Her daughter seems distant, even secretive. And her beloved Mary was always such a good girl--dutiful and loving. But does someone know more about Mary, and about her last day, than they've revealed?

The bonds between mothers and daughters, and husbands and wives should never be broken. But you never know how far someone will go to keep a family together...

A psychologist working for the LAPD goes on a dangerous journey through Los Angeles' criminal underworld to track down her missing foster daughter in this gripping new thriller by the author of the international bestseller Baby Doll.

You'll do anything to protect her. But you'll have to find her first.

When LAPD forensic psychologist Becca Ortiz agrees to foster teenage runaway Ash, she knows she will love and protect her as her own daughter.

Ash may have turned her back on her old life on the streets, but there is still one person who she can't bear to lose. Now he is about to drag her back into a dark world where nothing and no one is safe.

How far will Becca go to save her daughter?

And can she find her before it's too late?