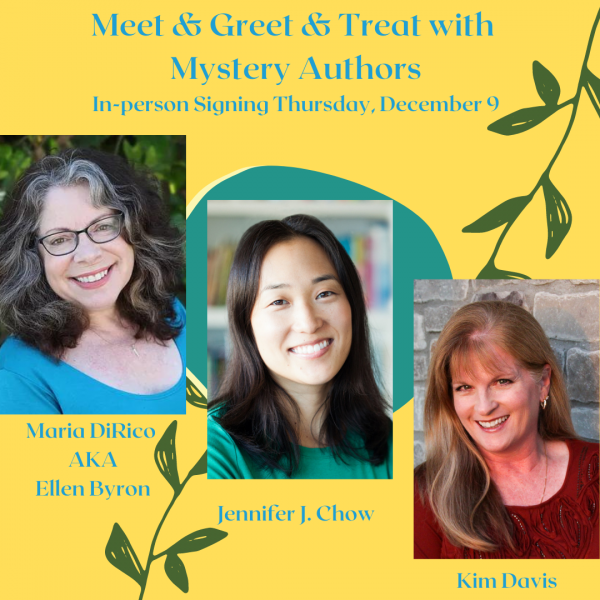 Maria DiRico is the pseudonym for Ellen Byron, author of the award winning, USA Today bestselling Cajun Country Mysteries. Born in Queens, New York, she is first-generation Italian-American on her mother's side and the granddaughter of a low-level Jewish mobster on her father's side. She grew up visiting the Astoria Manor and Grand Bay Marina catering halls, which were run by her Italian mother's family in Queens and have become the inspiration for her Catering Hall Mystery Series. DiRico has been a writer-producer for hit television series like Wings and Just Shoot Me, and her first play, Graceland, appears in the Best Short Plays collection. She's a freelance journalist, with over 200 articles published in national magazines, and previously worked as a cater-waiter for Martha Stewart, a credit she never tires of sharing. A native New Yorker who attended Tulane University, Ellen lives in Los Angeles with her husband, daughter, and two rescue dogs.

Kim Davis lives in Southern California with her husband and Goldendoodle puppy, Missy. When she's not spending time with her granddaughters or chasing the puppy around, she can be found either writing on her next book, or working on her blog, Cinnamon, Sugar, and a Little Bit of Murder, or in the kitchen baking up yummy treats to share. She has published cozy mysteries SPRINKLES OF SUSPICION, CAKE POPPED OFF!, FRAMED AND FROSTED and suspense novel A GAME OF DECEIT. She has had several children's articles published in Cricket, Nature Friend, Skipping Stones, and the Seed of Truth magazines. Kim Davis is a member of Mystery Writers of America and Sisters in Crime.

This event will be held in-person in the courtyard of our building, with safe social distancing procedures in place.

Preorders are strongly encouraged, given the supply chain issues!

Mimi Lee Gets a Clue (A Sassy Cat Mystery #1) (Paperback)