OC Read Presents How to Raise a Reader 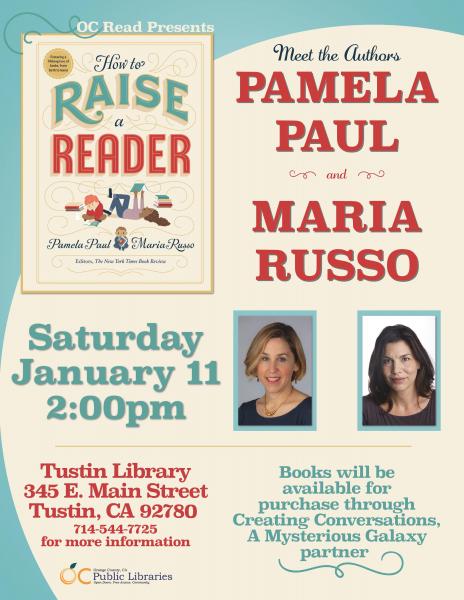 Pamela Paul is the editor of The New York Times Book Review and oversees books coverage at The New York Times, which she joined in 2011 as the children's books editor. She is also the host of the weekly Book Review podcast for The Times. She is the author and editor of five books: My Life with Bob: Flawed Heroine Keeps Book of Books, Plot Ensues, The Starter Marriage and the Future of Matrimony, Pornified, Parenting, Inc., and By the Book. She is a former columnist for The Economist, Worth, and The New York Times Styles section. Her work has also appeared in The Atlantic, The Washington Post, Slate, Vogue, Psychology Today, Brown Alumni Magazine and other national publications.

Maria Russo is the children’s books editor of The New York Times Books Review. She has been a writer and editor at the Los Angeles Times, The New York Observer, and Salon, and holds a Ph.D. in English and Comparative Literature from Columbia University. She lives in Montclair, New Jersey with her husband and three children.

How to Raise a Reader (Hardcover)

An indispensable guide to welcoming children—from babies to teens—to a lifelong love of reading, written by Pamela Paul and Maria Russo, editors of The New York Times Book Review.

Do you remember your first visit to where the wild things are? How about curling up for hours on end to discover the secret of the Sorcerer’s Stone? Combining clear, practical advice with inspiration, wisdom, tips, and curated reading lists, How to Raise a Reader shows you how to instill the joy and time-stopping pleasure of reading.

Divided into four sections, from baby through teen, and each illustrated by a different artist, this book offers something useful on every page, whether it’s how to develop rituals around reading or build a family library, or ways to engage a reluctant reader. A fifth section, “More Books to Love: By Theme and Reading Level,” is chockful of expert recommendations. Throughout, the authors debunk common myths, assuage parental fears, and deliver invaluable lessons in a positive and easy-to-act-on way.