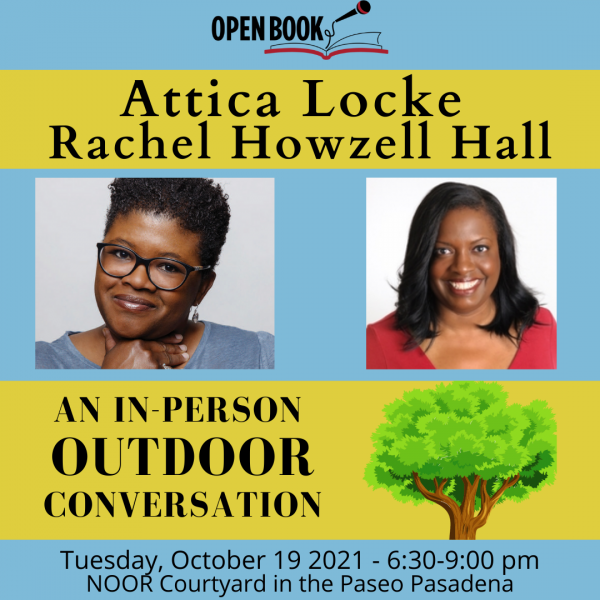 Open Book presents a rare opportunity to meet the Emmy-nominated and Edgar Award-winning writer Attica Locke.  She will discuss the latest book in her Highway 59 series, Heaven, My Home, sequel to the NY Times best-seller Bluebird, Bluebird. Heaven, My Home was named a best book of the year by the New York Times, Wall Street Journal, Houston Chronicle, and many others.

Attica will be in conversation with mystery writer Rachel Howzell Hall, the critically acclaimed author of recently released These Toxic Things. Hall’s And Now She’s Gone was nominated for the Anthony, International Thriller Writers, and Lefty awards, and was a finalist for the Los Angeles Times Book Prize.

The evening begins with a pre-event, hosted happy hour with appetizers. Then take in a scintillating discussion between bestselling mystery writers about their work and journeys to success in the world of crime fiction.

ATTICA LOCKE is the author of the 2018 Edgar Award winner Bluebird, Bluebird; Pleasantville, which won the 2016 Harper Lee Prize for Legal Fiction and was long-listed for the Baileys Women's Prize for Fiction; Black Water Rising, which was nominated for an Edgar Award; and The Cutting Season, a national bestseller and winner of the Ernest J. Gaines Award for Literary Excellence. She is also a television writer and producer, most recently for When They See Us and the upcoming adaptation of Little Fires Everywhere. A native of Houston, Locke lives in Los Angeles with her husband and daughter.

RACHEL HOWZELL HALL is the author of the acclaimed Lou Norton series and co-author of The Good Sister with James Patterson, which appeared in the New York Times bestselling anthology The Family Lawyer. Currently she serves on the Board of Directors for the Mystery Writers of America, is a member of Sisters in Crime, and has participated as a mentor in the Association of Writers and Writing Programs’ Writer-to-Writer Program. She lives in Los Angeles.

What is the Open Book Series?

Building on the successful Pasadena Festival of Woman Authors event which has been presented annually since 2009, the Pasadena Literary Alliance's vision for the new series is to provide opportunities for the community to enjoy authors of all kinds – both established and emerging, national and local, men and women, writers of fiction and non-fiction – in settings that complement the author’s work or background and allow for engagement with the attendees.

In this "captivating" crime novel (People), Texas Ranger Darren Mathews is on the hunt for a missing child -- but it's the boy's family of white supremacists who are his real target.
9-year-old Levi King knew he should have left for home sooner; now he's alone in the darkness of vast Caddo Lake, in a boat whose motor just died. A sudden noise distracts him - and all goes dark.

Darren Mathews is trying to emerge from another kind of darkness; after the events of his previous investigation, his marriage is in a precarious state of re-building, and his career and reputation lie in the hands of his mother, who's never exactly had his best interests at heart. Now she holds the key to his freedom, and she's not above a little maternal blackmail to press her advantage.

An unlikely possibility of rescue arrives in the form of a case down Highway 59, in a small lakeside town where the local economy thrives on nostalgia for ante-bellum Texas - and some of the era's racial attitudes still thrive as well. Levi's disappearance has links to Darren's last case, and to a wealthy businesswoman, the boy's grandmother, who seems more concerned about the fate of her business than that of her grandson.

Darren has to battle centuries-old suspicions and prejudices, as well as threats that have b

These Toxic Things: A Thriller (Hardcover)

Mickie Lambert creates "digital scrapbooks" for clients, ensuring that precious souvenirs aren't forgotten or lost. When her latest client, Nadia Denham, a curio shop owner, dies from an apparent suicide, Mickie honors the old woman's last wish and begins curating her peculiar objets d'art. A music box, a hair clip, a key chain--twelve mementos in all that must have meant so much to Nadia, who collected them on her flea market scavenges across the country.

But these tokens mean a lot to someone else, too. Mickie has been receiving threatening messages to leave Nadia's past alone.

It's becoming a mystery Mickie is driven to solve. Who once owned these odd treasures? How did Nadia really come to possess them? Discovering the truth means crossing paths with a long-dormant serial killer and navigating the secrets of a sinister past. One that might, Mickie fears, be inescapably entwined with her own.