Some Like It Hot: Love, Chai, and Five Authors 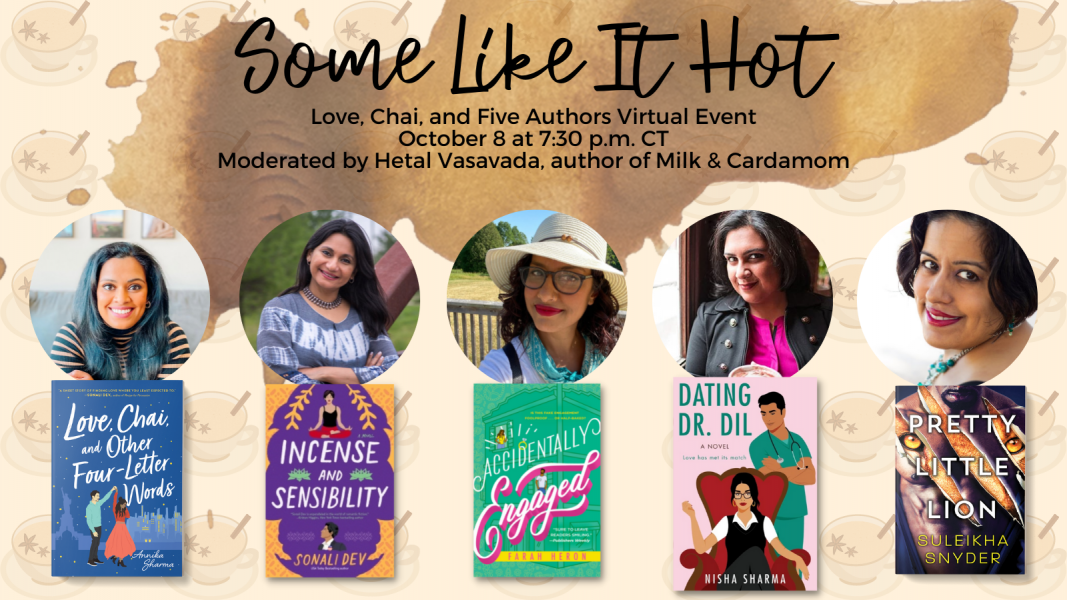 There is no charge for this event.
The only thing we ask is that you buy a minimum of one book by one of our authors.
You can do that any time from our ecommerce list below or by calling the bookstore.

Signed bookplates available with purchase of the authors' books from Creating Conversations.

USA Today bestselling author Sonali Dev writes Bollywood-style love stories that explore universal issues. Her novels have been named Best Books of the Year by Library Journal, NPR, the Washington Post, and Kirkus Reviews, and she has won numerous accolades, including the American Library Association’s award for best romance, the RT Reviewer Choice Award for best contemporary romance, and multiple RT Seals of Excellence. Dev has been a RITA® finalist and has been listed for the Dublin Literary Award. She lives in Chicagoland with her husband, two visiting adult children, and the world’s most perfect dog.

After a childhood raised on Bollywood, Monty Python, and Jane Austen, Farah Heron wove complicated story arcs and uplifting happily ever afters in her daydreams while pursuing careers in human resources and psychology. She started writing those stories down a few years ago, and never looked back. She writes romantic comedies and women's fiction full of huge South Asian families, delectable food, and most importantly, brown people falling stupidly in love. She lives in Toronto with her husband, two children, and a rabbit named Strawberry. She is considering getting a cat.

Nisha Sharma is the critically acclaimed author of My So-Called Bollywood Life, a Kirkus starred reviewed YA romance, and NPR best book of 2018. She is also the author of The Takeover Effect, a Library Journal starred reviewed adult contemporary romance, and the first installment of The Singh Family Trilogy. Her writing has been praised by Cosmopolitan, Entertainment Weekly, Teen Vogue, Buzzfeed, Hypable, and more. Nisha lives in New Jersey with her Alaskan husband, her cat Lizzie Bennett, and her dog Nancey Drew. She credits her father for her multiple graduate degrees, and her mother for her love of Jane Austen and Shah Rukh Khan.

Hetal Vasavada is the creator of the blog Milk & Cardamom and competed on MasterChef Season 6. She’s done multimedia recipe development for many culinary businesses including Back to the Roots. She lives in San Francisco, California.

After registering, you will receive a confirmation email.

Kiran Mathur knows firsthand just how dangerous love can be. After all, her sister's marriage in India nearly destroyed Kiran's family. So she's decided to redeem romance herself—by not falling for anyone who might disappoint her parents. That is, until she meets her new neighbor Nash Hawthorne...

Nash is a dedicated psychologist and determined to live a solitary life and to avoid attachments of any kind. His family life taught him to always expect abandonment, and he isn't ready to put his heart in harm's way. But in spending time with Annika, he starts to believe in a love he's never felt before.

For both, love feels like a risk. But when the future only starts to make sense with each other, it might be time to follow their hearts...

Incense and Sensibility: A Novel (The Rajes Series #3) (Paperback)

The author of Recipe for Persuasion—“not only one of the best but one of the bravest romance novelists working today” (Shelf Awareness)—adds an Indian American twist to Jane Austen's classic Sense and Sensibility in this delightful retelling that is a feast for the senses.

Yash Raje, California’s first serious Indian gubernatorial candidate, has always known exactly what he wants—and how to use his privileged background to get it. He attributes his success to a simple mantra: control your feelings and you can control the world.

But when a hate-fueled incident at a rally critically injures his friend, Yash’s easy life suddenly feels like a lie, his control an illusion. When he tries to get back on the campaign trail, he blacks out with panic.

Desperate to keep Yash’s condition from leaking to the media, his family turns to the one person they trust—his sister’s best friend, India Dashwood, California’s foremost stress management coach. Raised by a family of yoga teachers, India has helped San Francisco’s high strung overachievers for a decade without so much as altering her breath. But this man—with his boundless ambition, simmering intensity, and absolute faith in his political beliefs—is like no other. Yash has spent a lifetime repressing everything to succeed.

Including their one magical night ten years ago—a too brief, too bright passion that if rekindled threatens the life he’s crafted for himself. Exposing the secrets might be the only way to save him but it’s also guaranteed to destroy the dream he’s willingly shouldered for his family and community . . . until now.

A "delectable" romantic comedy about a woman who fakes an engagement to the boy next door to enter a couples cooking contest (Farrah Rochon, USA Today bestselling author).

When it comes to bread, Reena Manji knows exactly what she's doing. She treats her sourdough starters like (somewhat unruly) children. But when it comes to Reena's actual family—and their constant meddling in her life—well, that recipe always ends in disaster.

Now Reena's parents have found her yet another potential Good Muslim Husband. This one has the body of Captain America, a delicious British accent, and lives right across the hall. He's the perfect, mouthwatering temptation . . . and completely ruined by the unwelcome side dish of parental interference.

Reena refuses to marry anyone who works for her father. She won't be attracted to Nadim's sweet charm or gorgeous lopsided smile. That is, until the baking opportunity of a lifetime presents itself: a couples' cooking competition with the prize of her dreams. Reena will do anything to win—even asking Nadim to pretend they're engaged. But when it comes to love, baking your bread doesn't always mean you get to eat it too.

Nisha Sharma’s hilarious new romantic comedy inspired by The Taming of the Shrew features a love-phobic TV doctor who must convince a love-obsessed homebody they are destined to be together.

Kareena Mann dreams of having a love story like her parents, but she prefers restoring her classic car to swiping right on dating apps. When her father announces he’s selling her mother’s home, Kareena makes a deal with him: he’ll gift her the house if she can get engaged in four months. Her search for her soulmate becomes impossible when her argument with Dr. Prem Verma, host of The Dr. Dil Show, goes viral. Now the only man in her life is the one she doesn’t want.

Dr. Prem Verma is dedicated to building a local community health center, but he needs to get donors with deep pockets. The Dr. Dil Show was doing just that, until his argument with Kareena went viral, and he’s left short changed. That’s when Kareena’s meddling aunties presented him with a solution: convince Kareena he’s her soulmate and they’ll fund his clinic.

Even though they have conflicting views on love-matches and arranged-matches, the more time Prem spends with Kareena, the more he begins to believe she’s the woman he wants to spend the rest of his life with. But for Prem and Kareena to find their happily ever after, they must admit that hate has turned into fate.

To All the Boys I Loved Before meets World of Dance in this delectable love story that combines food, dance, and a hint of drama to cook up the perfect romance.

Radha is on the verge of becoming one of the greatest kathak dancers in the world…until a family betrayal costs her the biggest competition of her life. Now she has left her Chicago home behind to follow her stage mom to New Jersey. At the Princeton Academy of the Arts, Radha is determined to leave performing in her past and reinvent herself from scratch.

Jai is captain of the Bollywood Beats dance team, ranked first in his class, and is an overachiever with no college plans. Tight family funds means medical school is a pipe dream, which is why he wants to make the most out of high school. When Radha enters his life, he realizes she’s the exact ingredient he needs for a show-stopping senior year.

With careful choreography, both Radha and Jai will need to face their fears (and their families) if they want a taste of a happily ever after.

Lion shifter and Third Shift operative Elijah Richter has an easy but vital mission: Seduce arms dealer Emeric Aston's gorgeous girlfriend, use her as an entry point to the organization, and find out what the global terrorist is planning.

Unfortunately, he doesn't know that Meghna Saxena-Saunders is no ordinary celebrity influencer. She's trained as an assassin and spy, and she has her own reasons for cozying up to Aston. She immediately clocks the mysterious stranger watching her at a VIP party and the two fall into their lusty bed of lies. When their morning-after is interrupted by one of Aston's goons, both of their missions are thrown into jeopardy. Now Meghna must team up with Third Shift to cover her tracks and discover the truth.

Former MasterChef Season 6 contestant Hetal Vasavada, nostalgic for the desserts she grew up with, shares a versatile selection of classic Indian recipes and creative interpretations. These desserts are more than one-note sweet treats; they’re complex creations, relying on a wide variety of spices, nuts and fruits for incredible flavor. Readers will learn to work with superb combinations like pistachio and rose, chocolate and ginger, fennel and almond, citrus and sesame and more. Hetal makes it easy to create unbelievable treats with simple instructions and easy-to-find ingredients.

Readers new to Indian sweets will be introduced to traditional rice puddings, lassis and biscuits. Those already familiar with the go-to treats will be delighted to discover Hetal’s riffs on the classics. She infuses European and American favorites with Indian flavors, as in Mango Lassi French Macaroons and Pomegranate Curd Brownies. She also creates fun twists on Indian desserts, such as Thandai Cake Rusks, which combine a popular Indian tea cookie with the amazing flavor of thandai, a spiced beverage popular during festival season.