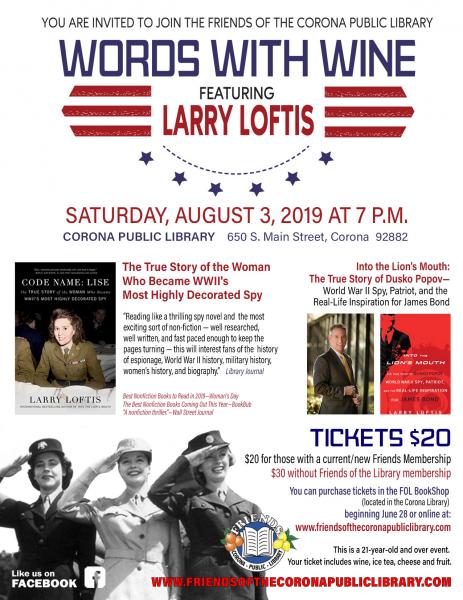 The friends of the Corona Public Library invite you to the 2nd Annual “Words with Wine” author event on Saturday, August 3, 2019 beginning at 7 p.m. This year’s event will feature author Larry Loftis.

Larry Loftis is the international bestselling author of the nonfiction spy thrillers, CODE NAME: LISE—The True Story of the Woman Who Became WWII's Most Highly Decorated Spy, and Into the Lion's Mouth: The True Story of Dusko Popov—World War II Spy, Patriot, and the Real-Life Inspiration for James Bond.

This event will feature wine, iced tea and a cheese, fruit, and cracker plate.

Tickets prices are $20 for new or current Friends of the Library member and $30 for general admission. Be sure to purchase your tickets early as last year’s inaugural event sold out weeks before. Tickets are available in the Friends of the Library BookShop located in the Corona Public Library beginning June 28 or they can be purchased online now at www.FriendsoftheCoronaPublicLibrary.com. Sorry, no tickets will be sold at the door. The last day for ticket sales is Friday, August 2 or until the event is sold out.

This is an event for those 21 years and over. If you have any questions about this event, please contact the Friends of the Corona Public Library at 951-279-6604 or email FriendsofCPL@CoronaCA.gov.

From internationally bestselling author of the "gripping" (Michael Connelly, #1 New York Times bestselling author) Into the Lion's Mouth comes the extraordinary true story of Odette Sansom, the British spy who operated in occupied France and fell in love with her commanding officer during World War II--perfect for fans of Unbroken, The Nightingale, and Code Girls.

The year is 1942, and World War II is in full swing. Odette Sansom decides to follow in her war hero father's footsteps by becoming an SOE agent to aid Britain and her beloved homeland, France. Five failed attempts and one plane crash later, she finally lands in occupied France to begin her mission. It is here that she meets her commanding officer Captain Peter Churchill.

As they successfully complete mission after mission, Peter and Odette fall in love. All the while, they are being hunted by the cunning German secret police sergeant, Hugo Bleicher, who finally succeeds in capturing them. They are sent to Paris's Fresnes prison, and from there to concentration camps in Germany where they are starved, beaten, and tortured. But in the face of despair, they never give up hope, their love for each other, or the whereabouts of their colleagues.

In Code Name: Lise , Larry Loftis paints a portrait of true courage, patriotism, and love--of two incredibly heroic people who endured unimaginable horrors and degradations. He seamlessly weaves together the touching romance between Odette and Peter and the thrilling cat and mouse game between them and Sergeant Bleicher. With this amazing testament to the human spirit, Loftis proves once again that he is adept at writing "nonfiction that reads like a page-turning novel" ( Parade).