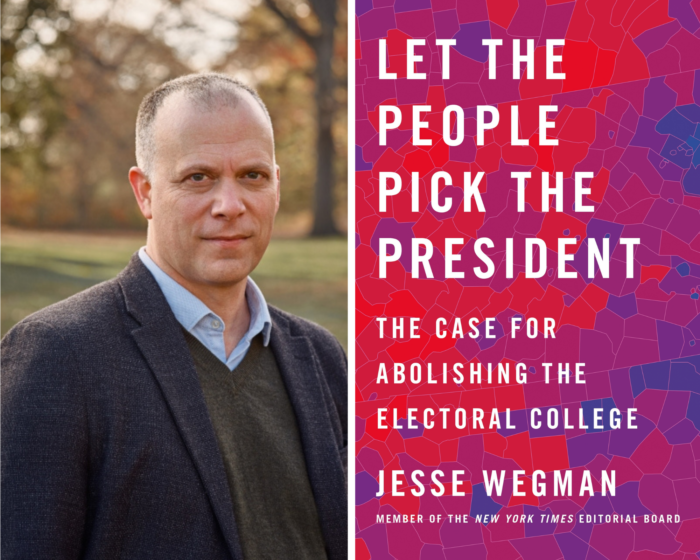 Writers Bloc Presents® is a nonprofit organization specializing in presentations focusing on  literary and cultural work, thoughts and ideas as represented in and by modern works of fiction and nonfiction.

The person with the most votes wins. Except in the race for President. Isn’t it time we remove the outsize influence of some states in favor of a one person one vote system?

The United States was a different country in 1787 when our founding fathers dreamed up the Electoral College. Neither women nor Black people held the right to vote. Voting in a “battleground state” has much more urgency attached to it than voting in a “safe state.” We vote to elect a president, but the Electoral College often makes our votes utterly irrelevant. Jesse Wegman, a member of the New York Times Editorial Board, an attorney, and a reporter on the Supreme Court, has undertaken a history of the Electoral College and its impact on so many presidential elections. In his new book, Let the People Pick the President, Wegman moves us through the efforts of hundreds of attempts to abolish the Electoral College. He offers a neat solution to getting around the Electoral College: the National Popular Vote Compact, which many states have adopted, but not quite enough. The Electoral College has stood in the way of real voter choice for 250 years, Wegman argues.

In conversation with Congressman Jamie Raskin (D-Maryland). Congressman Raskin sits on the House Judiciary Committee and the House Committee on Oversight and Reform, among others. He is outspoken about the need for electoral reform and fair representation.

Let the People Pick the President: The Case for Abolishing the Electoral College (Hardcover)

The framers of the Constitution battled over it. Lawmakers have tried to amend or abolish it more than 700 times. To this day, millions of voters, and even members of Congress, misunderstand how it works. It deepens our national divide and distorts the core democratic principles of political equality and majority rule. How can we tolerate the Electoral College when every vote does not count the same, and the candidate who gets the most votes can lose?

Twice in the last five elections, the Electoral College has overridden the popular vote, calling the integrity of the entire system into question—and creating a false picture of a country divided into bright red and blue blocks when in fact we are purple from coast to coast. Even when the popular-vote winner becomes president, tens of millions of Americans—Republicans and Democrats alike—find that their votes didn't matter. And, with statewide winner-take-all rules, only a handful of battleground states ultimately decide who will become president.

Now, as political passions reach a boiling point at the dawn of the 2020 race, the message from the American people is clear: The way we vote for the only official whose job it is to represent all Americans is neither fair nor just. Major reform is needed—now. Isn't it time to let the people pick the president?

In this thoroughly researched and engaging call to arms, Supreme Court journalist and New York Times editorial board member Jesse Wegman draws upon the history of the founding era, as well as information gleaned from campaign managers, field directors, and other officials from twenty-first-century Democratic and Republican presidential campaigns, to make a powerful case for abolishing the antiquated and antidemocratic Electoral College. In Let the People Pick the President he shows how we can at long last make every vote in the United States count—and restore belief in our democratic system.